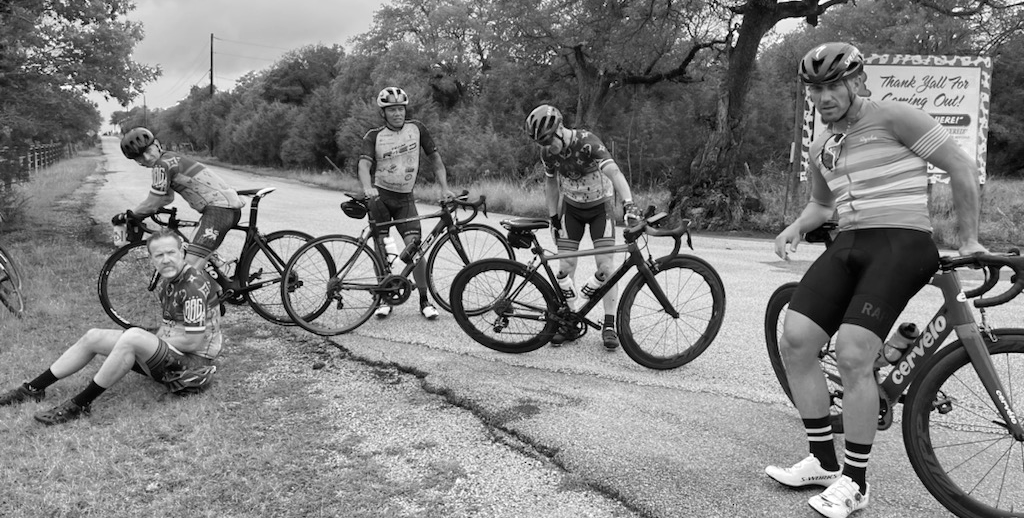 We just returned from our World Tour stop in Austin Texas. The entire trip we dealt with dodging raindrops to get our rides in. Some cyclists would be down in the dumps with the radar we were looking at. But our club took it in stride and made lemon margaritas out of lemons.

We snuck in a few rides with some dry pavement. We took a few KOM’s. At night, we had dinners with some of the wives on the trip and laughed our asses off the entire trip.

On Sunday we were going to squeeze in our last ride. It started off with dry pavement. About 20 miles in we were riding in heavy mist and decided to take a diversion to avoid the rain. It stopped raining and we dialed it up a notch to try and outrun the storms.

As we crested a small hill there was a blind right turn. I tried to scrub some speed into the turn, but at 30.3mph, we hit a patch of wet pavement that was coated with oil and mud. 6 of our 8 riders ended up sliding across the road into a fence on the other side of the road.

We slowly got up and started taking inventory of our bodies and bikes. Brian Jackson was second wheel and was spooning me as we both slid across the pavement. As we laid in the gravel, I asked if he was ok and he said I think so. He was in a lot of pain and we quickly knew when he couldn’t lift his arm there was some structural damage.

The other guys all hit the pavement hard too. Lots of road rash and a few of us hit our heads pretty hard on the tarmac.

Scott Moon stayed upright and was quick to take control of the situation with sorting logistics with the 3 wives on the trip (one of which is a trauma nurse!). Within 10 minutes the ladies were on the scene loading riders in the car while Brian’s neighbor drove a truck up to pick up the bikes that were not functioning.

Brian Jackson and John Robinson took the most damage on the fall (less we not forget Drake’s Rapha shorts). They were both taken to the hospital to be scanned and assessed.

John came out with a possible concussion and Jackson broke a scapula, clavicle, and had two hip fractures. Miraculously, Brian’s broken bones all reset on their own and he didn’t need to have surgery!

Nobody planned on hitting the ground Sunday. All of these riders have a very high level of experience and I would follow them anywhere on a bike with full trust in their abilities.

What doesn’t kill us may make us stronger as a group, according to findings from new research published in Psychological Science.

The research suggests that, despite its unpleasantness, pain may actually have positive social consequences, acting as a sort of “social glue” that fosters cohesion and solidarity within groups:

“Our findings show that pain is a particularly powerful ingredient in producing bonding and cooperation between those who share painful experiences,” says psychological scientist and lead researcher Brock Bastian of the University of New South Wales in Australia. “The findings shed light on why camaraderie may develop between soldiers or others who share difficult and painful experiences.”

I’ve done dozens of camps with these guys. International bike trips with some. The RFCC World Tour is a magical thing. The bonds we continue to build (preferably without crashing) are the glue that creates mental wellness for all of us. I said earlier that I would follow any of these guys on a bike, but I can also trust them with my personal life struggles off the bike. In today’s world it is hard to find people you can truly trust and I think that is what is special about the RFCC.

I’m grateful that we all walked away from the crash on Sunday. I’m thankful there wasn’t an oncoming car. We were blessed that the wives of the riders were nearby and able to assist.

This was a truly bonding experience.