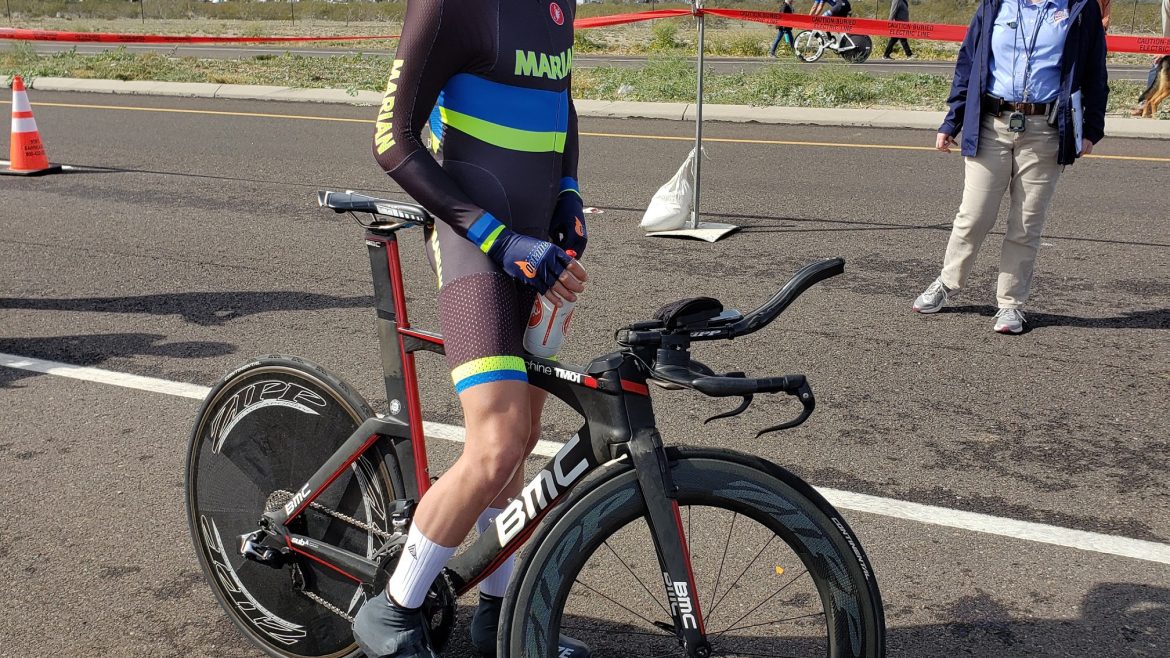 Valley of the Sun Stage Race located in Phoenix, AZ is one that I always look forward to. I did it when I was a junior racing age 17 and then again in my last year of juniors when I was racing age 18. After not racing VOS for a couple years since the junior ranks, I decided to go back this year. It’s always nice to be able to escape the harsh Midwest winter for some warm, early season racing in Arizona.

This year I went back to do the cat 2 race. In the junior category, we were required to ride road bikes for the TT. However, this year, I was able to take my time trial bike out there and full TT gear. Thanks to Rollfast team member Scott Moon aka “trailer” for letting me use his disc wheel. It actually still has his number from an Ironman covering the valve hole, and I decided to leave it on there for good luck. He thinks it’s pretty funny that I left it on there since we always give him crap for being a triathlete! I also was lucky enough to borrow some more speed for the TT set up un the form of a Zipp 808 NSW from a local friend, Tom Williams. In addition to the wheels, Zipp was kind enough to give me their new Vuka Aero handlebar. I actually got it in January before it was officially unveiled in February, so I had been riding with some electrical tape covering the logos! Finally, I borrowed a nice Castelli speed suit from a buddy at Marian (they used the suits at track nationals) as well as a Giro TT helmet from the Marian team.

Now to the actual race. I did openers the day before the TT on my TT bike. Not going to lie, I felt like crap. I was anxious that I would feel like crap again the next day during the TT. I spent most of the day thinking “what if I feel like crap tomorrow and do a terrible TT after spending so much time and effort to get out here?” Well, I finally got out of my head and went to bed early. I woke up the next day feeling pretty decent. I ate a giant bowl of oatmeal for breakfast. I actually left the oatmeal on the hood of the car and didn’t realize it until about half way out of the neighborhood. I can’t believe it didn’t fall off! I also had to make a stop for a cold brew coffee on the way to the TT. Caffeine can definitely give you superpowers.

I got to the start, had my dad pin my number to the skin suit, kitted up, and started warming up. I stopped at the porta potty to take a leak. The coffee went straight through me. As I was waiting, I had someone come up to me. She was a pro cyclist on Team Twenty20. She recognized the Marian kit and introduced herself as Allie Dragoo. She said she also went to Marian! What a small world.

Warming up, I could tell I was feeling pretty decent. The weather was nice. Not too hot, not too cold. Power was good. I was feeling ready. I got to the start line, nervous for the first race of the season. The time ticked down and I was off. The course was a 14.5 mile out and back. It was a false flat uphill out, but tailwind, and slight downhill but headwind on the way back. On the way out, I think I caught my 30 second, minute, and minute and a half man. I was feeling good when I got to the turn-around about 15 minutes into the effort. I knew I was going well. On the way back I knew it would be a headwind, so I saved a bit of effort. I did my best to keep my head down, stay tucked in an aero position, and give it everything I had on the way back. I caught a few more people on the way back. I was seriously thinking I could get a podium with the speed I was holding. IN the last few miles I threw up some energy gel and coffee. It doesn’t taste as good the second time, trust me. I got through the finish and had no idea how I placed, but I felt that I went fast and I knew I did my best. After waiting around about an hour for results, I found out I got 4th! A much better result than I expected going into it, and not bad at all for a 125lb guy on a flat TT course. What I don’t have in power I think I was able to make up for in aerodynamics! #narrowisaero J. I was pretty pumped about the result, finishing a couple seconds behind my friend Ean, from Marian, who was 3rdplace and less than 20 seconds off the overall lead.

Going into the road race, I had my eye on the guys close to me in GC. It was a 94 mile race (6 laps of about a 15-16 mile course) with each lap ending on a gradual climb. The climb had a headwind so each time up it was hard to drop people since everyone could sit in the draft. A break got away on lap 5. Me and a few other guys started working together to bring them back. We weren’t super worried about it with the headwind climb. Once we hit the climb, the break started coming back.

On the final lap, on a downhill tail/crosswind section a small break got away again. They were riding strong and made it to the final climb with a still a pretty decent gap. A few from the break dropped off, but one guy remained strong up at the front. I knew he was super strong from riding with him in Florida over Christmas break. He is one of the strongest guys I have ever ridden with. As we go to the top of the climb before the finish, everyone started sprinting for the finish. The guy in the break barely got nipped at the line and held on for second. There were no gaps and I came in at 12thplace, moving up from 4thon GC to 3rd.

The third and final stage of the race was a crit in downtown Phoenix. I was a little nervous going into it, hoping to maintain my 3rdspot overall. Fourth and fifth overall were within 2 and 4 seconds of me respectively. I knew the guy in 4thwouldn’t be likely to try and make up time as he’d be working for his teammate who was in 2ndoverall. However, the guy in 5thwas only four seconds behind me and I knew he was strong after het got a few time bonus sprints in the road race the day before.

I was trying to watch the guy who was in 5thto make sure he didn’t get away. He kept riding slightly off the front, but didn’t really have a gap so I wasn’t too worried. Then, he got a bit of a bigger gap. I didn’t think too much of it since he was by himself and it was still early in the race. Then, Justin Bolde, the guy who got second in the road race (and averaged 450 watts in the TT on his road bike) attacked and bridged. I knew how strong he was and that it was going to be a good move and would most likely stay away. I tried to bridge. I was alone for a bit, then a few others caught up to me. We worked together and chased really hard for 4-5 laps. The two up front were definitely some of the strongest in the race and they were getting farther away.

The group caught us, and after the hard effort to bridge, I tried to sit in and conserve some energy for a while before the finale. I was bummed about not getting across. I knew those guys were going to stay away and win the crit, and that the guy in 5thwas definitely going to surpass me and knock me out of my 3rdoverall. They ended up winning by 20 seconds ahead of the group. I moved back to 4thoverall, the same as I was after the TT. I wished I had been able to get a podium place, but I was still happy with my result.

I didn’t have huge expectations going into the race as it was the first race of the season and not exactly a perfect course for a smaller guy like myself. I am pleased with how the fitness is coming along and can’t wait for the rest of the races this season! Next up will be Tour of Southern Highlands in Georgia next weekend (March 1-3). Until next time!