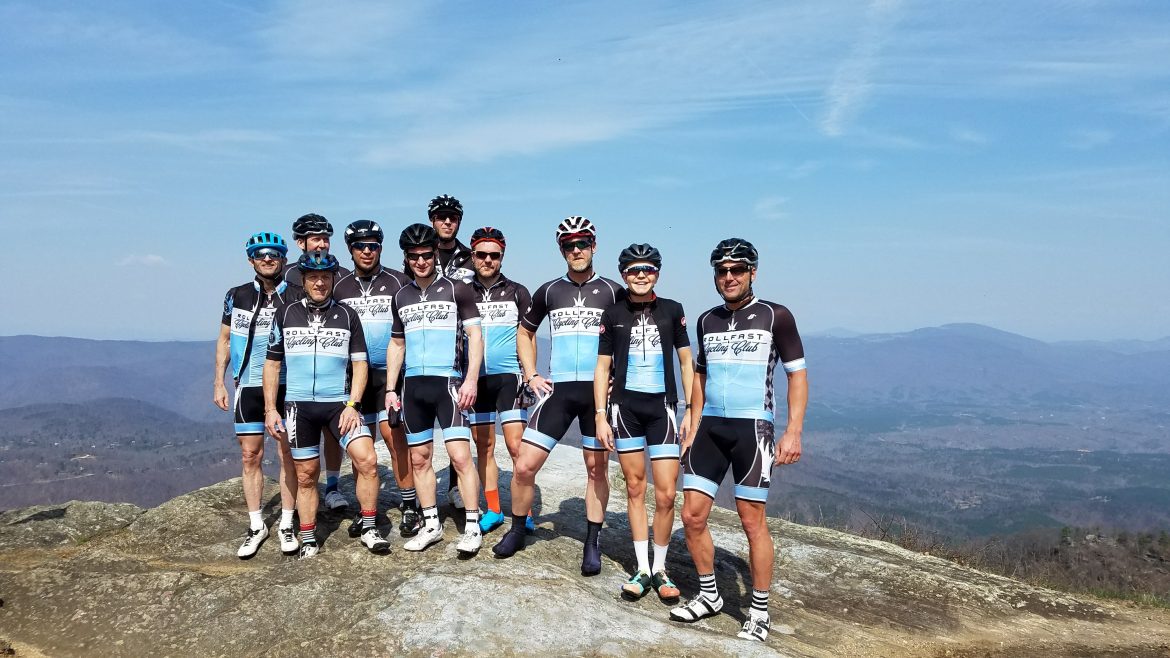 Rollfast has been fast to incorporate some of it’s key partners into training camp. Normatec was on hand with 6 sets of recovery boots, 2 sets of hips and even one set of arms. Our camp food was supplied by long time friend and partner Tyner Pond Farm. The menu was diverse and all of the meat and eggs came from Greenfield Indiana at the farm. We also added our favorite on bike nutrition to the menu for on the road. RBar Energy was in every jersey pocket providing a variety of flavors with minimal all natural ingredients. Without the proper nutrition and recovery we could never achieve the “Activities” set out by Cinch Coaching’s top gun Tom Danielson. Tom drew up plans for each of our routes and challenged us to work in teams to outwit and out perform each other. At the end of each “activity” everybody on the ride felt like they contributed to the ride and nobody got left behind. There was never a clear individual “winner” or “loser”, each activity required teams to perform.

Each year it’s a virtual race to get to the cabin. I really don’t know why we hustle, nobody can unpack until the trailer arrives but there are some bragging rights and the ability to claim your bed. After the 9 hour road trip, we quickly unloaded and Mrs Rollfast went into kitchen mode preparing lasagna for the guys. We jumped on the bikes for a quick shake out ride. The sunset was beautiful and it felt so good to be outside without lobster claw gloves!

We decided to add in a day to camp this year and with that day we took a spin down to Paris Mountain. We’ve climbed it before with Big George, but it isn’t a regular stop for our crew.

CINCH ACTIVITY: Today’s mission was to warm up, break into three groups (defined by Tom) that split up abilities and created teams that were very different. On the ride to the climb, each team was to ride steady doing 1 minute medium pulls. Once at Paris Mt, we regrouped all teams and started the climb together. The activity required each team to stay with their 2 slowest riders to the 2k mark. From there, the 2 fastest riders on each team were released. They had to finish together and the first team of 2 to the top was the days winner.

I’ll recap from my viewpoint on this climb. Our team consisted of Scott Moon, Brian Jackson and myself. While Moon is known as “clutch” we knew he wouldn’t be the fastest up the climb. So we rode with him to the 2k mark. “Clutch” was just that… He dug deeeeeeep! Passing other teams. Chopping wheels. Giving it a second effort as we were at 1.8k. Grunting to the 2k mark he gave Brian and I a comfortable gap to work with.

The other teams had more riders which held them back a little on the first 2k, but they were stacked with better climbers. This was going to get interesting. When they hit the 2k mark, Spencer Miller and Brian Robinson came up quick. We grabbed their wheels for a few minutes but it was too much. Then from WAAAY back came Gene James and Grant Goldman. I could tell they were going super hard and I knew neither had done Paris Mountain before.

As we approached the last bend in the climb before the finish, I told Brian Jackson they were cooked and we apexed the turn and attacked. We drilled it up to the top for 2nd place on the day. Brian ended with a bloody nose from the effort!

Very close behind was Gene and Grant – they had no idea where the finish was and didn’t realize we were sprinting for it. Ahhhh tactics. The rest of the team rolled up a few minutes later and we enjoyed a great descent and cruise back to the cabin.

Our queen stage of the trip consisted of the Hincapie Gran Fondo 80mi course. In past years we’ve tackled this first and many times have cut it short due to coming out too hot. As we expressed this to Tom in designing our activities he crafted the perfect plan so all that wanted could finish, gain fitness and feel good about contributing to the group.

CINCH ACTIVITIES: Tom developed a pretty complex plan for Friday! There are 3 categorized climbs on the route and he had an activity for each one. I’m going to focus on the first of the day Skyuka Mountain.

Brian Robinson and I took a page out of the CINCH playbook and surfed the terrain through all the changes in grade and dropped the other two groups. We really put a ton of time into them using the techniques Tom has taught us. I don’t believe we were “stronger” or had more power, we just rode very efficiently.

The last 1k was supposed to be a battle between the 3 captains, but Brian and I cruised to the top and didn’t let off the gas. When you draw your sword you slit the throat!

At the top we got a great team photo as tradition requires. The rest of the day was long, fun, challenging, emotional and involved crashes and even gas station food. It was a ride none of us will soon forget.

Everybody was pretty smoked after Friday, but we came down to ride, so it’s time to hit Caesars Head!

CINCH ACTIVITY: Today was pretty straight forward. We ride as a group to the mountain protecting the slower guys and riding at a social pace. Then we climb in small groups at an easy pace to the 2k to go mark. Regroup and TT in 30 second gaps with the slowest rider going first and the fastest last.

Seems pretty straight forward right? I don’t know if it was the slight altitude gain or total loss of blood to the brain, but Spencer and I rode the entire mountain with Jay. When we got to the 2k to go mark there was a Rollfast jersey in sight! These knuckleheads missed the start line. Spencer and I were pretty sure they were just afraid we would beat them hands down on this individual effort.

We sent Jay up the road and did our own 2 man TT race. Instead of taking 30 seconds, Spencer and I started together and rode my threshold effort. At 1k to go that kid LAUNCHED! I chased for 45sec at around 450 watts and he kept pulling away. So I settled back into my own ride. He told me later with the 1000ft sign on the road he thought he went way too deep! I ramped up the power as the finish was approaching, not catching Spencer, but close to the 30sec gap I should have taken.

Even though it was just Spencer and I, I’m always amazed at how close these Activities come out at the finish. Tom has a special gift for setting up these scenarios from across the country with some riders he’s never met before on terrain he isn’t familiar with. It’s an amazing experience.

Some of the guys had to get back to town for family, work etc and rolled out early. A few others of us wanted to enjoy the 70 degree sunshine just one more day before heading back to winter in Indiana. We mapped a little ride down to Travelers Rest and got some coffee at a cool little shop called Tandem. The roads were winding, rolly and smooth. It was a perfect ending to a perfect week. Spencer provided some tunes on the way back and we all enjoyed cutting free of stress and acting like we were little boys exploring the world like we did 10, 20, 30, 40 and even 50 years ago.

These are my guys

The bond that builds in the Rollfast crew each year isn’t accidental. We ride together. We eat and sleep together. We are there for each other when cancer strikes when we crash bikes. We help each other with parenting kids and being a better spouse. Yeah, we goof around a lot too. But you better believe that every person sporting a crown on their back is special to me and I would do everything in my power to help them in this crazy world.